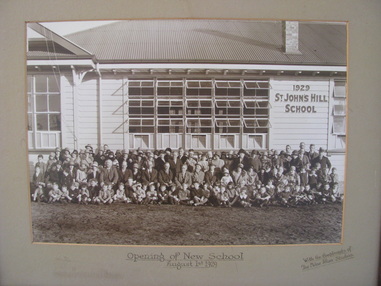 Whanganui City is flanked by hills. On the eastern side of the river are Durie Hill and Bastia Hill with St Johns Hill overlooking the western side.

This area was traditionally known as Kaierau (Kaiherau) “food for the many”. It was a Ngā Rauru pā site which supported over three thousand occupants. Ngā Rauru, a southern Taranaki iwi, had its traditional boundaries from Kaihaukupe (Castlecliff river mouth) up to Kaierau (St Johns Hill) up to Tawhitinui (opposite Rānana) and the source of the Pātea river.

The brow of the hill, where today Victoria Park provides cricket grounds, croquet greens, tennis courts and a look-out, was used by the Ngā Rauru tribe as a settlement. Midden refuge such as pipi shells and broken umu stones have been found from time to time. 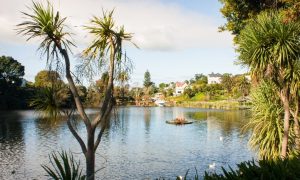 Near the school is the iconic Virginia Lake (Rotokawau). This is a naturally formed lake trapping water between two sand dunes. The traditional name, Rotokawau refers to the bird life that frequent the lake – Roto (lake) Kawau (Black Shag) 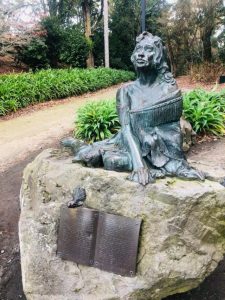 The story of Virginia Lake has it’s beginning far back in Maori mythology. Whanganui Sculpturess, Joan Morrell, cast a bronze statue portraying Tainui, the Maori maiden whose tears of grief for her slain lover, form the lake. Unveiled June 3 1978, this stands in the lake grounds.

The first Europeans to be alloted land on St Johns Hill were Mr S.Parkes and Mr J.Thomas. However, Mr Thomas a surveyor with the New Zealand Company, sold his land to his friend, Mr S. Harrison, without ever settling on it himself.  It included Lake Rotokawau, and Mr Harrison renamed the lake “Virginia Waters”.

Mr Parkes named the wooden slope of his property leading down to the flat (now upper Victoria Avenue) “St Johns Wood” after the wood of the same name near his old home in London.  The name St Johns was given to the flat under the hill, and subsequently to St Johns Infant School (Keith Street School), St Johns Hotel, St Johns Post Office and later the St Johns Workingmen’s Club.  The lake property was eventually sold in 1862 to Mrs W. Hare. The Borough Council bought the lake from her in 1874 for use as a water supply for Whanganui township.

The first school on St Johns Hill was a private one conducted in a house which stood where the croquet lawns are today. It was burned down in the late 1890’s. The name of the teacher is not known.

In 1901 Miss E. Bayly bought a section in Brassey Road and built a school on it.  Here she conducted a private school assisted by her sister, Miss V.Bayly.  From 1904 the school was also used by St Paul’s Presbyterian Church as a Sunday School. In 1911 the church purchased the property and leased the school to Miss E. Bayly, and later to Miss U.Woon.

By the early days of the war the parents on the hill were demanding a State school for their children.  In 1916 the Education Board met their request. On July 10 a side school to Queens Park School replaced the private school. Miss Woon was appointed teacher in charge.

Her sister, Miss E.Woon, then decided to open a private school in the family home in Parsons Street.  This property ran through to Tarata Street. However, at the end of 1917 Miss Woon closed this school and took up a position at Marsden College, Wellington.

Each week the head teacher at Queens Park School would visit the side school in Brassey Road.
The school admitted pupils up to and including standard two. During this time the roll fluctuated considerably from 27 to 42.

When St Johns Hill School was erected in 1929 the opening roll numbered 44 pupils – 20 primers, 17 standard ones and seven standard twos.  Miss Woon took charge of the primers and until November, when she was replaced by Miss B.Gage as principal, Mr G. Law took standards one and two.

Get the SchoolAppsNZ Mobile App